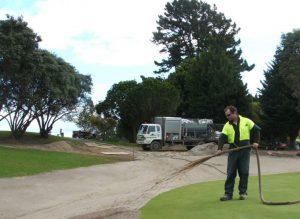 Hydroseeding means applying seed, fertiliser and paper or wood pulp with water in the form of a slurry (which is a fine, semi-liquid mixture). The slurry is sprayed over an area, to apply the seed.

It is not an instant stabilisation practice, but the slurry does provide limited protection from raindrop impact for a short time until the grass is established.

Hydroseeding establishes vegetation quickly. It is especially useful for steep and/or inaccessible areas, or surfaces without much topsoil.

Hydroseeding is mainly used in the following situations: 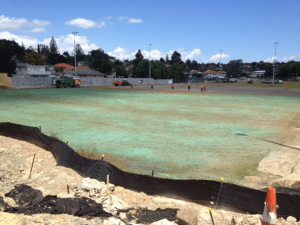 Hydroseeding has the following limitations:

There are different types of hydroseed mixes. They use different combinations of soil ameliorants (substances that aid plant growth), paper or wood pulp. Sometimes a binder is used to help seeds adhere to the soil surface.

Hydroseed mixes vary greatly depending on the site-specific conditions and the outcome required. You need to consult with a hydroseeding contractor about your particular job, so that the seed mixes and application rate will achieve the required outcomes.

As with other methods of seeding, the area is not considered stabilised until at least 80% density of grass cover has been established.

When constructing and operating hydroseeding